2023: Will You Support The Next President To Remove Subsidies?, Zara Onyinye Asks Nigerians

Popular loyalist to Governor Yahaya Bello of Kogi State and social political commentator, Zara Oyinye, has stirred the hornets nest after asking Nigerians if they are ready to give their support to the next president of Nigeria if he decides to remove petroleum subsidies upon his emergence in 2023 as the general election is fast approaching.

Oyinye, who recently declared her total support for Bola Tinubu after her principal, Gov Bello lost at the presidential primary at Eagles Square in Abuja, asked “Will you support the next president to remove subsidies (the price of petrol might get to N300/liter) and move the funds to the provision of more important amenities and also float the currency so that the naira can find its true value (maybe higher than what it is today)? Obitrice.” 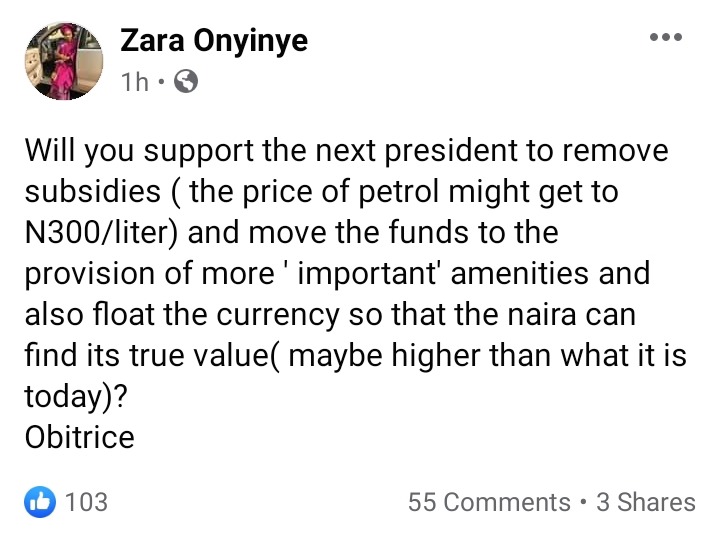 This vital question that she directed to all Nigerians has attracted lots of comments and reactions on her social media handle. While many Nigerians seem to be against the proposition to remove petroleum subsidies completely, others are of the opinion that it should be done if that would make petroleum products available nationwide without long queues at filling stations.

In my opinion, the first and the best thing that an incoming President should do is to all moribund refineries across the country. By so doing, this will end exportation of petroleum products into the country and put a total stop to long era of subsidies in the petroleum sector, thereby making the country self-dependentt in production.

Content created and supplied by: Adisatellite (via Opera
News )