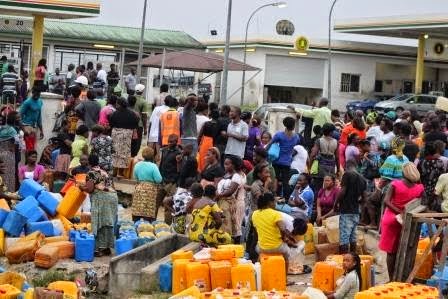 There are growing concerns that with no end in sight to the continued rise in the cost of importing Automated Gas Oil, (AGO) or diesel, and subsidising Premium Motor Spirit (PMS), popularly called petrol, Nigerians are bound to face a resultant foreign exchange-related hardship that may outstrip the gains of subsidy.

A clear indication of an imminent danger emerged on Tuesday when oil marketers under the aegis of the Natural Oil and Gas Suppliers Association (NOGASA), raised the alarm that about 75 per cent of filling stations across the country are currently out of business due to their inability to purchase diesel required to power their tankers and transport PMS to their various outlets.

The marketers also stated that the cost of diesel would keep increasing and might hit N1,500/litre in the next few months if nothing drastic was done to curtail the current challenge faced by importers of the product.

According to NOGASA, the only solution to the current challenge was for the federal government to raise the pump price of petrol a little in order to reduce the huge foreign exchange used in PMS imports. Diesel, which is deregulated and used mostly by industry and airlines, is going through the roof due to the Rudsia- Ukraine war.

This, it said, would eventually free up some forex for diesel imports, a development that would impact positively on the rising cost of diesel, which it stressed was currently sold at N850/litre. Most industries are already being hit as price continues to skyrocket, which is also driving inflation that stands at 17.8 percent.

The National Bureau of Statistics (NBS), in its Foreign Trade in Goods Statistics report released recently disclosed that Nigeria spent N1.51tn on the imports of petrol in the first quarter of 2022, an amount representing 25.54 percent of the total imports for the quarter, and an increase of 17.05 percent when compared to the N1.29tn spent on importing fuel in Q1 2021.

Data obtained from the Nigerian National Petroleum Company Limited (NNPC) last week showed a monthly rise. PMS subsidy spending by the oil firm which, however, described it as under-recovery/value shortfall. Importation of petrol into Nigeria and payment of subsidy for the product have solely been handled by the NNPC for a while.

The approved subsidised pump price of PMS in Nigeria is between N162 and N165/litre, but oil marketers say the actual cost should be a little higher or about the same price as diesel were PMS deregulated.

Latest figures from NNPC showed that the amount spent on fuel subsidy maintained an upward trend from January to April this year. In January, February, March and April, the national oil firm incurred N210.38bn, N219.78bn, N245.77bn and N271.58bn respectively, amounting to a total of N947.51bn during the four-month period.

“If you go round now you will see that about 75 per cent of filling stations in Nigeria have gone out of business. There is no diesel to take fuel to their stations. All of them are going down”, National President, NOGASA, Bennett Korie had told journalists.

“And it is not that the fuel is not there, but the cost of bringing it to the stations is too high. We know that the crisis between Ukraine and Russia has contributed badly, but the government has to do something fast, otherwise we are going to buy diesel in the next two weeks at N1000 to N1500/litre.”

Asked whether anything was being done to address the challenge, Korie replied, “As far as I am concerned nothing for now. The only way out, if you want to know, is that the government should increase the price of fuel a little to reduce the money spent on PMS subsidy.

“I know Nigerians will not be happy to hear this, but this is the only solution. They should increase the price of fuel a little so that the savings will enable the Central Bank of Nigeria to have enough foreign exchange.

“You and I know that we import everything now in Nigeria. Diesel is an imported product and it is fully deregulated. So the importers are not getting dollars at the official CBN rate to import diesel. Everybody is going to the black market to get dollars to import their products and so you expect the price of diesel to be high.”

According to Korie, if the government could bring down the rate at which it spends foreign exchange on PMS imports, this would help other businessmen who import diesel to bring in products at low prices.

He also stated that this was the major reason why fuel queues had failed to clear in Abuja, as many filling stations lacked the funds to buy diesel at a high cost to run their trucks, transport petrol to the capital city and would still be made to sell PMS at N165/litre.

He explained that Lagos, Port Harcourt, Warri and other states closer to these areas had no queues because the three named cities have seaports and large depots for loading and distributing petroleum products.

Korie said, “The reason why you are having scarcity of petroleum products particularly in Abuja is as a result of the high cost of diesel. The price of diesel today in the market is N850/litre. You will also agree with me that the money being paid as bridging claims to transporters is not enough.

“The price is N850/litre and you are giving your driver 1,200 litres from Lagos to Abuja, if you do the calculation you will find out that the landing cost (for transporting the fuel) is about N40/litre.

“So if you add that to PMS, buying at the depot price and selling here, it is too high. So if your cost of bringing it in is at N40/litre and you bought it at N155/litre, when you add this you will get N195/litre. But you are to sell at N165/litre. So who will do that kind of business? It is already a loss-making business.”

Businesses under pressure
Checks by Business Hallmark revealed that already many businesses are struggling for survival, with some suspending operations due to surging diesel prices, while others have pruned down their staff strength in a bid to cut cost.

The president of Association of Micro Entrepreneurs of Nigeria (AMEN), Prince Saviour Iche, who doubles as the chief executive officer of Bright Future Hope Enterprises, said these are the most distressing times for business owners in Nigeria.

He stated that, before now, he spent N208,000 per month on diesel, “but as of today, I am spending N650,000 every month,” adding that the hike in the price of diesel is having a double effect on some businesses.

“For example,some of the raw materials are produced through the use of diesel. I got my raw material of plastic per truck for N680,000 before now. But, with the hike in diesel price, right now, I am loading a truck of the same quantity of raw material for N1.480 million, an increment of N800,000.”

Stressing that this is killing the industry, he added that some entrepreneurs have closed down their factory while the few surviving ones are living on life support.

He noted that there is no alternative to electricity, saying, “we cannot use petroleum generators to power our machines due to the size, and solar or inverter is not an alternative to small enterprises. How many of us can invest in solar? It is very expensive; to get a solar that will power my factory will cost around N15 million.”

He called on the government to help in finding a solution to this, saying, the ripple effect of this will result in job loss and increase the unemployment rate if factories continue to close down operations.

Speaking on the sidelines on the Afreximbank in Cairo, Egypt, last week, Alhaji Abdul Samad Rabiu, said there is crisis looming in the diesel and forex sectors, which threaten the survival of industry and the economy. He said that rising prices could force companies to shut down because there is a limit to which prices can raised.

According to him, that a tonne of wheat that used to cost N2m is now N6m and coupled with diesel, only a few can survive.
Similarly, a frozen food business operator at Ogba area of Lagos, Mrs. Bisola Ajayi, said the increase in the price of diesel has not been easy on the business, noting that, before now she spent less than N100,000 on diesel as there is also electricity in the area the business is located.

She, however, stated that for the month of May, she spent almost N500,000 on diesel, lamenting that the last few weeks had proved much more difficult for her business due to poor power supply and the high cost of diesel.

Also, a cow dealer at Kara Market in Ogun State, who simply gave his name as Abdul, told our correspondent that the sharp increase in the price of beef in the market does not necessarily mean that there is scarcity of cow.
According to him, the situation is as a result of escalation in cost of transporting the cows from the Northern parts of the country to Lagos and other cities in the South.

“Before now you could transport a cow from Maiduguri or Damaturu to Lagos with N10, 000, but today, it costs N30, 000 or more to do so due to high cost of transportation occasioned by hike in price of diesel”, Abdul said.

Meanwhile, Naira grew weaker against the U.S dollar on Thursday despite improvement in forex supply at the official market. The exchange rate declined by 0.12% to close at N420.5/$1 compared to N420/$1, which it closed on Wednesday, according to data from the website of the FMDQ Exchange.

The exchange rate at the parallel market remained stable on Thursday, having closed at N607/$1, the same as recorded during the previous trading session, according to information from BDC operators.

Nigeria’s external reserves appreciated marginally by 0.04% on Wednesday, 15th June 2022 to stand at $38.63 billion from $38.62 billion recorded the previous day. The external reserves had been on a downward trend due to the continuous intervention by the CBN in the FX market in order to ensure the stability of the local currency.